On July 31, 2013, the Bensalem Township School District Board of School Directors and Administrators hosted a “Community Charrette” to provide the Bensalem community an opportunity to gain an understanding behind the plans for the renovation of Bensalem High School.  We shared the why, when and how; provided our educational vision; showed the design presentation by EI Associates and D’Huy; provided small group tours of Bensalem High School and hosted a Question and Answer Session.

On Monday, November 23 from 6 to 8:30pm the District and the Bensalem Education Foundation co-hosted the Premiere/Open House of the Bensalem High School Performing Arts Center.

Over 50 tables were manned in the new cafeteria by student groups including Robotics, Sports, Cheerleading, ROTC, and many more. Guests toured the newly renovated areas including the band, orchestra, and choral rooms, OTN Studio, and School Store. At 7pm the doors to the new auditorium were opened. Our guests were excited to see the new lighting, new seating arrangement, new curtains, and of course, the new cushioned seats. The emcees for the evening were OTN Director, CJ Mills and retired BHS Assistant Principal, Mrs. Leonore Hope. The performances by our wonderful students in band, chorus, orchestra, drama, marching band, and dance were second to none. Special thanks to our performers and their teachers, Mr. Michael Zimmerman, Ms. Regan Ruiz, Mr. Paul Nespola, and Mrs. Anna Hentz. You truly make Bensalem shine! Returning as guest speakers were retired BHS Choral Director Mr. Don Thullen and retired BHS English teacher, Mr. Mark Banchi. OTN Alumni 6ABC Sportscaster, Jeff Skversky and 6ABC News Reporter, Trish Hartman addressed the crowd. Special thanks to our Food Service Coordinator, Mrs. Polly Welch and her team for the wonderful refreshments. Finally, thank you to our Board of School Directors and District administration for making the renovation project a reality.
Photo Gallery (Aerial Photos taken November 24, 2015)
Photo Gallery (January 14, 2016)
Photo Gallery (Hallways, General Classroom, Science Labs, and Common Area - entire wall is a White Board) ~ February 8, 2016
March, 2016
As we continue with the renovations of the Bensalem High School and move into Phase 4, we will need to perform asbestos abatement at the southwest wing on both the first and second floors. This abatement activity is to remove asbestos containing materials (ACM) that were commonly used in construction materials when the school was originally built in 1968 and expanded in 1971. Historically, asbestos in building materials could be found in pipe insulation, plaster, floor and ceiling tiles, ductwork, roofing shingles, and adhesives. These are common materials found in our schools, and that we are removing as part of the renovations.

The areas which were identified containing ACM will be sealed off from public access during the abatement process. The removal of this asbestos containing materials follow strict federal and state guidelines, standards and regulations which require District’s environmental engineer to monitor the abatement process and provide reporting to the regulatory agencies that all ACM has been properly removed and disposed. These monitoring results must meet AHERA’s PCM air clearance standard following asbestos abatement procedures, and provide evidence that an airborne asbestos hazard did not exist within the areas sampled at the time of sampling. All sample postings are listed above.

The asbestos abatement commenced on or about Monday, March 7, 2016 and will continue through approximately March 28, 2016. Testing will be performed in accordance with AHERA’s PCM air clearance standards.

For more information on asbestos, specifically as it relates to schools, please visit the United States Department of Environmental Protections website at http://www2.epa.gov/asbestos/school-buildings.

Please join us on Saturday, September 16th for the re-dedication ceremony and ribbon cutting.  We look forward to showing off our magnificent new building and hope you can join us. 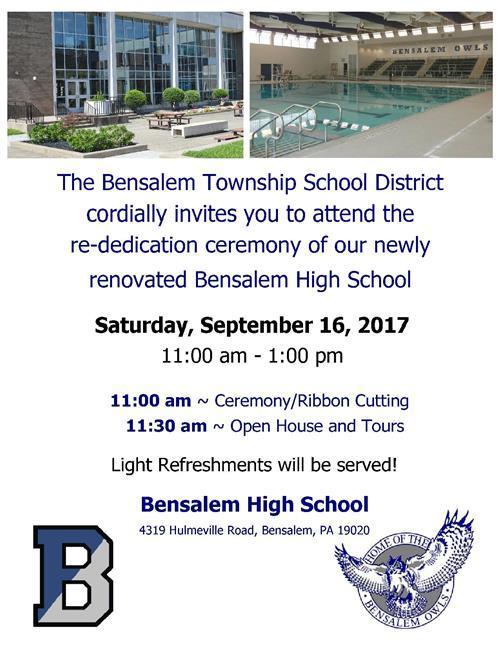