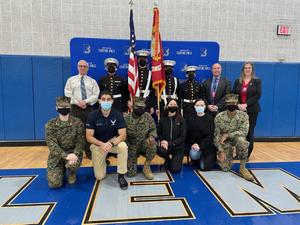 On Tuesday, December 21, 2021 at their morning formation, the Bensalem High School Marine Corps JROTC officially took on the designation of Naval Honor School as they connected a streamer – given to them by the Director of Marine Corps JROTC – to their company guidon.
This designation is based on several criteria, including the number of cadets active in school activities and clubs, the number of community service hours for the unit as a whole and per cadet, the number of organizations assisted by the unit, and scholastic achievements including the number of academic awards and scholarships given to cadets. BHS was also measured by participation in public affairs events, community service, drill/color guard team competitions, marksmanship competitions, academic competitions, leadership camps, physical fitness team competitions, and field trips.
This honor was bestowed upon the MCJROTC earlier this year, but the ceremony to officially hang the streamer to their unit colors was delayed as they awaited the return of former Cadet Commanding Officer Kaitlyn Robinson (BHS ‘21) as she took a break from her studies at George Mason University.  Kaitlyn was accompanied by her former cadet staff that included: Mohamed Kafya currently a member of the Airforce ROTC program at Penn State University, Shayna Sit attending Saint Joseph’s University, and United States Marine PFC Lorenzo DeBerry.
Of special note, commanding the Color Guard for ceremony was Cadet 2NDLt Liam Robinson, Class of ‘23 and holding the Marine Corps flag was Cadet Private First Class Michael Sit, Class of ‘25.  Both are the younger brothers of the former cadet leadership.
Congratulations to Leadership Studies Department - Senior Marine Instructor/Marine Instructor Col John C. Church, Jr., USMCR (Ret.) and MSgt Shawn M. Worthen, USMC (Ret.) and our cadets!